This is an international website intended for audiences outside the United States.
Pilih negara anda

What is Crohn’s Disease?

Crohn’s disease is a chronic (persistent) inflammatory disease which can occur anywhere in the gastrointestinal tract – from the mouth to the rectum.

It usually affects the rectum, colon and the lower parts of the small intestine (the terminal ileum). In very rare cases, the stomach, oesophagus or mouth may also be involved. Find out more about the digestive system.

Figure 1: Locations where Crohn’s disease can affect the intestines 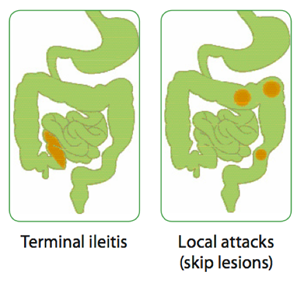 FACT: Crohn’s disease is named after the American doctor, Burrill Bernard Crohn, who in 1932 wrote about the disease and called it regional ileitis (localised inflammation in the small intestine, which is called the ileum in Latin). Later the name of the disease was changed to Crohn’s disease in recognition of his work to understand the disease.

Who gets Crohn’s Disease?1

There is a genetic factor. The risk for children or siblings to get Crohn’s disease is about 10%, and 35% if both parent’s have the disease.

The symptoms vary in character depending on whether the disease is in the small intestine or the colon. It can often take a longer time from the appearance of first symptoms until diagnosis than for ulcerative colitis. This is because in the beginning the symptoms can be uncharacteristic, making the correct diagnosis difficult.

There is a greater tendency to abdominal pain and slightly less blood in the stools.

Children who have Crohn’s disease may suffer delays in both growth and sexual development. Get information for caregivers of people with IBD.

Try everything before surrendering. Remember there is the possibility to get the power over the illness.

We use cookies on this site to enhance your user experience

By clicking any link on this page you are giving your consent for us to set cookies.

OK, I agree
We use cookies to ensure that we give you the best experience on our website. If you continue to use this site we will assume that you are happy with it.Ok